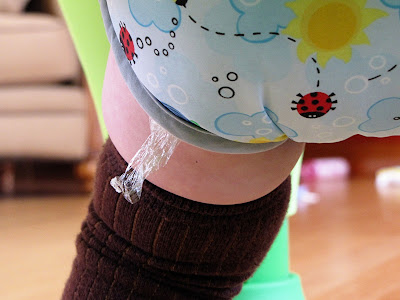 Yes, that is plastic wrap hanging out of my son’s diaper.  No, he is not just sitting on it in his exersaucer.  Yes, it is there on purpose!  Any more questions??  Really?  Oh, ok…  let me try and answer them all for you.

Today, I am trying to ‘catch’ my son’s BM so that I can quickly run it (and him) into the clinic for some tests.  Hence the plastic wrap.  The BM is not supposed to touch his diaper (lest it be contaminated by the chemicals in the diaper! – makes you think twice about disposables, doesn’t it??), and since it’s not so easy to convince a 10-month old to go in a cup, I have lined his diaper with plastic wrap, as the clinic suggested.

Then the fun part…  I have to bundle him and myself up get us all (including said BM) out the door and to the clinic across town in less than 30 minutes.  Oh joy.  I can hardly get us out of the house in 30 minutes, let alone be somewhere 10 minutes away!!

So, the game has begun.  I am dressed and ready to go.  His clothes and clean (plastic wrap-less) diaper are ready to be changed into as soon as he has done his business.  Knowing me, I will probably get all the way there and realize I have left the goods behind!

Oh well.  He has to have a blood test also, so the trip won’t be wasted either way.

Anyways, back to the purpose for all this fun and excitement in our day…  (ha!)

As most of you know (and some of you don’t!) Bjorn has had silent reflux since he was born.  The first 10+ weeks of his life were miserable for us and torturous for him.  He cried pretty much non-stop, and was only content being held (in his Moby Wrap!) or nursing.

When we finally discovered what was wrong with him, we were able to try a few meds and found one that worked!  He was put on Prevacid and it made an immediate difference in the quality of his life (and ours!).

Fast forward about 8 months…  he is still on Prevacid every day, and is just not quite right.  He coughs a lot, often waking himself up from sleep.  He gags and spits up constantly.  He still wants to nurse every few hours, and often just needs to be ‘comforted’ for no apparent reason.  He always congested and has a persistent rattle in his lungs (to us, apparently though his lungs are fine!).

So, we are headed on a journey to figure out what is wrong with him!  We will be making an appointment with a GI doc at Seattle’s Children’s Hospital, which is what these tests are for.  Hopefully it will be a quick and painless process for all of us to help him get better!!

I will keep you all posted as we move forward and learn more.  At this point, we appreciate your prayers!!  (especially as I have to take him in for his blood-work later today!)  :o(  I am not looking forward to that!

You are still so sad…  and in so much pain.  We keep waiting for some relief, and every day ends with the frustration of pain that is not going away.  We are halfway through this trial of medicine number one – baby Zantac.  So far – no relief!  But the doctor says it can sometimes take 2 weeks before the medicine shows any results.  And we can’t try something new until those 2 weeks are up.  So, we wait…  ohnot-so-patiently. 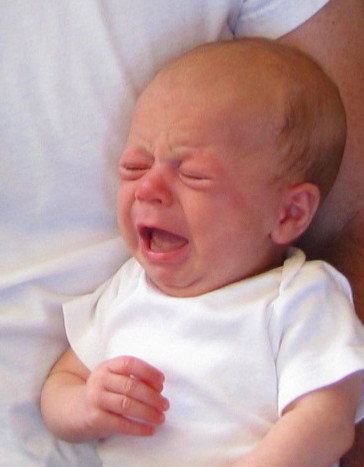 How can we really be patient, when for you patience equals pain?  You are so miserable.  Screaming in pain at times, and just staring at the world with your big, sad eyes the rest of the time.  Your eyes are so expressive.  You can’t say a word yet, but your eyes say so much!
Even now, as I sit here typing this – with one hand, I am holding you and watching the pain flit across your face while you sleep.  It seems you really find no escape, even in your dreams!
Now don’t get me wrong, you do have good moments scattered throughout your day.  But they are just that… moments.  Brief glimpses of the happy little boy being trapped inside by your pain.
I love those moments.  I live for those moments!  When you smile, you melt our hearts.  You’re such a charmer, and you have such a beautiful smile!  All squinty-eyed with a dimple in your right cheek.  I love that dimple!  I love YOU!
Your happiest times are early in the morning.  After your  firstbreakfast at around 4:30 every morning, while we’re cuddling and deciding if you’re still sleepy, you smile at me like I’m your best friend in the whole world and you haven’t seen me in weeks.  I love those smiles!
Someday we will be able to show everyone your wonderful smile, but for now we just try to enjoy them when they come.  You smile so rarely, and by the time we run and grab a camera, the moment has usually passed… as you again remember your pain.  I am trying to focus on just enjoying those smiles, instead of trying so hard to share them with the world! 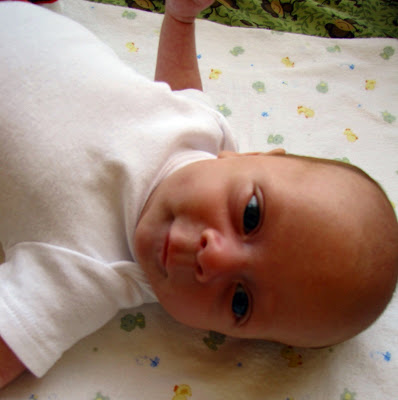 One more week to go, sweet boy.  Then we hopefully see some relief, or at least are able to move on to medicine trial number 2.  For now we keep on waiting.  And we hug and cuddle you as much as we can, so you at least know that we wish we could help you…  and so you know how much we love you.

I think I just had the most painful and emotional discovery, so far, of my son’s short little life.  I have been doing lots of research lately and it seems to me that Bjorn may not actually have colic, but rather Silent Reflux.  His doctor’s appointment is in two days, see *update! 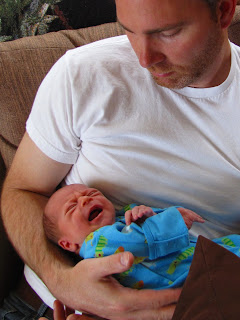 Silent Reflux is a form of acid reflux that is very easily missed and often not so easy to diagnose.  Basically it is acid reflux that the baby usually ‘catches’ before it becomes spit-up and swallows back down.  Sounds like a good thing, right?  For me at least?  Not so many clothes to wash, etc?  Well it’s horribly painful for him, and does twice as much damage to his esophagus as regular acid reflux because, in essence, he is having to suffer through the pain of acid burning his esophagus twice as often.  As it comes up, and again as it goes back down.
If this is what he has it explains a lot of his behaviors and also breaks my heart completely.  You see, Silent Reflux is often misdiagnosed as colic.  The biggest difference between the two is that colic is generally assumed to be not-painful for the baby, just uncomfortable, and is something that most babies grow out of ‘over-night’ usually at around 12 weeks.  Silent Reflux, on the other hand, is very painful and if we’re lucky, he may grow out of it by about 1 year old. 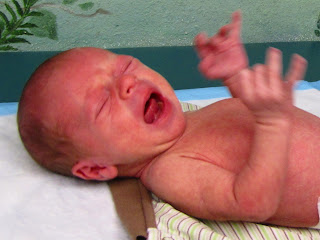 My mother’s intuition has been telling me all along that he has been in very real pain…  not just colicky discomfort.  But listening to everyone else and not having anything else to go off of, I kept telling myself it was just colic and (as “they” say) it was more miserable for me than him, and he would grow out of it…  hopefully around the 4th of July (his 12 week birthday!). 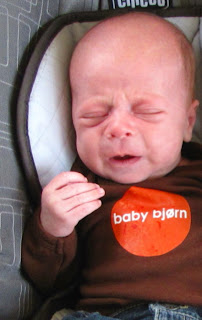 But even though I kept telling myself that, over and over again, I never really believed it.  My heart kept telling me that there was more to his fussiness than that.  Which explains why I have been unable to put him down, holding him practically all day long every day, only putting him down to sleep at night (which, thankfully, he does pretty well!).  I just couldn’t put him down and see his pain.  The looks he gave me screamed “mom! why can’t you just hold me and let me nurse!  I don’t know what’s wrong with me either, but I do know that’s all that helps me feel a little bit better!”
Those looks absolutely break my heart.  They are so very real, and knowing and full of big huge instant tears.  Not the same as other looks and tears of “I’m impatient” or “I’m bored” or “I’m a little uncomfortable”.  These are looks of “I’M IN PAIN!  HELP ME MOMMY!”.  Ugh.  I can’t stand those looks.  They hurt so bad. 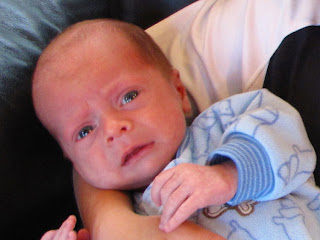 —–
*update
We just got back from Bjorn’s doctor’s appointment.  Dr. Rose confirmed my diagnosis…  he has Silent Reflux.  Now the fun part begins…  the medications!  We are starting with Baby Zantac – 0.7ml twice a day.  We will give that 2 weeks, and if it doesn’t work, we will try something new.  Although I am so glad there are options, I am praying with all my heart that this first try works and my sweet boy can start feeling better!
On a more positive note, here are his current stats:
(at 9 1/2 weeks old!)
Weight: 10lbs 12oz – 25th percentile
Height: 24 1/2 inches – 80th percentile
Head: 39.4 cm – 30th percentile
The bottom line?  (In the doctor’s words) We have “a long and lean boy with a perfectly average head!”  :o)
Anyways, we’ll keep you posted on Bjorn’s progress.  And we would really appreciate your prayers that this medicine works!