These rich, fudgy, ohsoadorable heart shaped brownies are packed with a mexican chocolate hit of cinnamon and cayenne and topped with a silky, sweet mocha ganache. 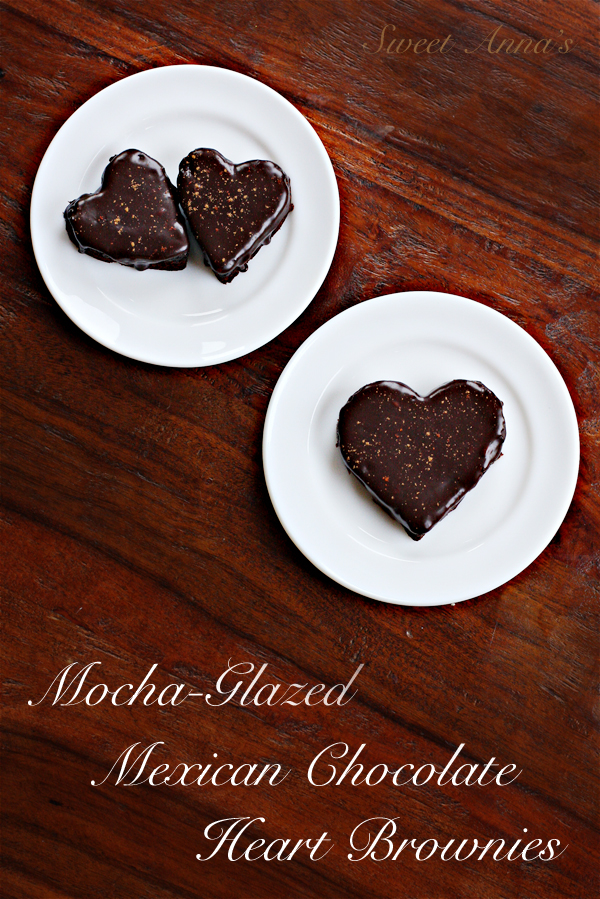 Ok, so I am a total sap when it comes to things like Valentine’s Day.

It’s not really even about the hallmark-holiday itself, but just that I absolutely adore everything cute and pink and hearts and just all the things.

So, of course I have to make heart shaped things in my kitchen.  Thankfully, my boys love it just as much as I do!

These cute brownies are incredibly simple to make, and perfectly impressive to share…  Give these a try if you are looking for something fun to make for your friends and loved ones this week.

They will love knowing they are worth this special touch!

for the brownies:
for the ganache:

Preheat the oven to 350ºF. Grease a 9x13" baking dish, line with parchment, grease the parchment and set aside.

In a large mixing bowl, stir together the cocoa and baking soda. Stir in 1/3 cup of the melted butter until smooth. Stir in the coffee or boiling water until the mixture is smooth and thick.

Stir in the sugar and eggs with the remaining 1/3 cup melted butter. Stir in the vanilla, cinnamon, salt and cayenne until just smooth.

Dump in the flour a and stir until just combined.

Spread the batter into your prepared baking dish and bake for 35-40 minutes, or until the edges start to pull away from the pan and a toothpick inserted in the center comes out almost clean.

Cool the brownies completely in the pan and then lift the parchment to transfer the brownies to a cutting board and then cut them out with a heart-shaped cookie cutter.

(Here's a tip for all those brownie scraps left over: Chop them up pretty small and spread them on a plate. Place them in the freezer until firm and then transfer them to an airtight container and store in the freezer. They make amazing ice cream toppings!)

Place all the cut-out brownie hearts onto a tray and into the fridge or freezer until cold. (This can be done several days ahead in an airtight container. Brownies freeze wonderfully!)

When you are ready to glaze the hearts, remove them from the fridge or freezer and place them on a rack set on top of a foil-lined pan (to catch the drips!).

Chop the chocolate, if you haven't already, and place it in a medium bowl, with the liqueur if you are using.

In a small saucepan, heat the heavy cream over medium-high until it just comes to a boil. As soon as it starts boiling (watch it closely, or you will quickly have a boil over!) ((Ask me how I know!)) pour the hot cream over the chopped chocolate in the bowl.

Let it sit for about 30 seconds (while you wipe up the boiled-over cream! ha!) and then gently stir the chocolate and cream until it is very smooth and shiny. Let the chocolate cool for a bit, stirring occasionally.

(The longer you let the chocolate cool, the thicker your glaze will be. That is totally up to you!!)

When it's ready, spoon some chocolate on top of each brownie heart, smoothing it carefully with the back of a spoon and letting some of it drip down the edges. Place the pan back into the fridge to set for a few hours and then serve!

If you want to let people know what's in the brownies, you can dust them with a tiny bit of cinnamon and cayenne. You could also leave those spices out of the brownies all together if you prefer!

You may have a bit of ganache left over…  don’t worry.  Stick it in the fridge and eat it with a spoon when it’s firm!  Instant truffles!  :o)