Some of you may have seen this recipe on here before…  It’s one of my long-time favorites, and my husband’s favorite dessert!

I finally touched up the recipe a bit though, and am very pleased with this new and improved version. 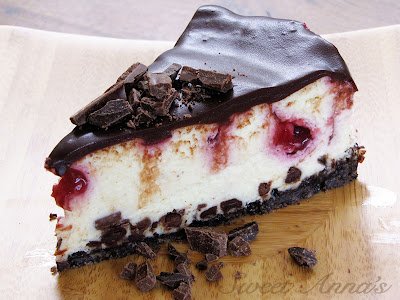 Now, I know that at a glance the directions look a little long and involved, but they really are quite simple….  I just wanted to cover all the bases for anyone who is intimidated by cheesecake!

Also, since this cake needs to be made ahead (like ALL cheesecakes do!), just take it one step at a time and don’t stress.  I promise you can do it!!

Oh, and don’t worry about any cracks as the cheesecake cools…  the chocolate ganache on top will fill in and hide any blemishes!

for the raspberry sauce:
for the crust:
for the filling:
for the ganache:

Stir together the raspberries, sugar, cornstarch and water in a medium saucepan. Bring to a boil, stirring occasionally, and boil 5 minutes. Pour through a fine-mesh strainer into a small bowl and store in the fridge until you are ready to make the cheesecake. (This step can be done a few days in advance!)

Preheat the oven to 350ºF. Stir together the finely crushed oreos and melted butter in a medium bowl until well mixed. Press into the bottom of a Springform pan and bake for 10-15 minutes, until the crust is set. Remove from the oven, reduce the oven temperature to 325ºF and let the crust cool while you prepare the filling.

In a medium saucepan, heat the half & half to almost simmering. Remove from the heat and stir in the white chocolate until melted and smooth. Set aside.

In a large bowl, beat together the cream cheese and sugar until smooth. Beat in the eggs, one at a time, making sure to blend completely after each one. Beat in the vanilla, salt and the melted white chocolate mixture.

Wrap the pan with the cooled crust in it tightly with foil. Place the foil-wrapped pan in a roasting pan, and put a pot of water on the stove to boil (you will be making a water-bath for the cheesecake to bake in).

Place the roasting pan into the oven and pour water into the roasting pan to reach about halfway up the sides of the Springform pan. Bake the cheesecake at 325ºF for 60-70 minutes, until the center is almost set (but still jiggles if you shake the pan).

In a small saucepan, bring the heavy cream just to a boil. Remove from the heat and stir in the chocolate until smooth. Pour the ganache over the top of the cooled cheesecake, smoothing with a spoon and allowing some of the ganache to drip over the sides of the cheesecake. Return to the fridge to chill an additional 3 hours or until the ganache is shiny and set.

At this point you can wrap the cheesecake tightly in foil and freeze for several months, if desired! Cheesecake is a great make-ahead dessert, as it only tastes better as it chills. If frozen, remove from the freezer and thaw in the fridge for a few hours before serving!
3.1
https://sweetannas.com/2010/08/white-chocolate-raspberry-truffle-cheesecake.html
www.sweetannas.com