*This is a sponsored post for SheSpeaks & Luvs.  My opinions are completely my own!*

Some of you may remember that I tried cloth diapering several years ago.  I started when my oldest was about 6 months old and loved it!  Until I had baby #2 who couldn’t wear cloth (long story).

And then baby #3 came along, and for a while there all 3 of those ‘babies’ were in diapers at the same time.

Needless to say, I quit cloth.

And although I think about going back sometimes, the truth is…  I’m just too lazy.  And too content with where I am right now.  (And maybe too hopeful that in another year or so I will be done with diapers?!)

So, I a little reluctantly sold off all my cloth diapers several months ago (Did you know that cloth diapers have an amazing resale value?!  I didn’t at first either!) and never looked back.

I am happy with my disposable diapers.  And I am truly sorry for adding more of a burden to the environment, but my life is just too overwhelming to change now.

Or maybe I am just having too much fun with cute little girl outfits that don’t have to factor in a big fluffy bum?!  ;o)

Anyways, I have been pretty set in my ways as far as which disposable diapers I love to use.  So, I was a bit skeptical about trying something new when I was offered the chance to give the new and improved LUVS Ultra Leakguard diapers (they are only available at Walmart…  the clue is in the blue!  These special ones have a blue seal on the box!) a try.

But I realized it never hurts to try something new, and you might like to know what I think about the redesigned LUVS as well! 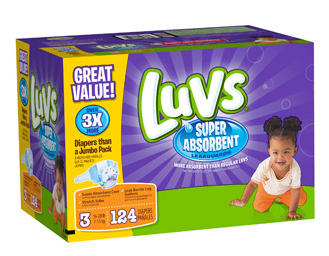 I have been using them for a few weeks now, and I have to say there have been no leaks and no major issues with them.  If you liked LUVS diapers before, you will probably love them now, with their new overnight leak-guard!

Unfortunately for me, ever since my first pregnancy several years ago, I have been hyper sensitive to perfume-y smells and the LUVS scent is just too overwhelming for me.

I really don’t know if it’s just me (that’s entirely possible!) but the fragrance they put in the diapers is so strong that I can’t even smell my daughters poopy diapers through the scent.  I suppose that’s the point, but to me that is just gross.  I WANT to know if my child has just filled their diaper, because I want to change it as soon as possible!  Especially with my girl…  I don’t want her sitting in that stuff!  YUCK!

Also, my boys think the ‘scent’ of the diaper is a dirty smell, so they keep trying to tell me every 30 minutes that she is dirty, even when she’s not.

I have to say, I won’t be using these diapers again for that reason.  But, I will say again that if you have liked LUVS in the past, or scented things don’t bother you, these fit well and we had no issues with leaks or blowouts, so for that, they definitely did their job!