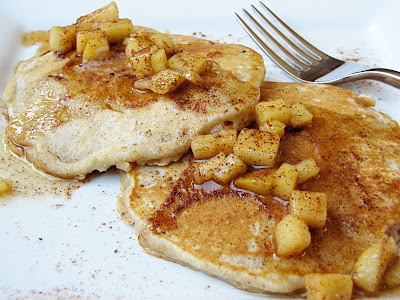 Does anyone else have a new-found aversion to the Joy of Cooking books because of Julie & Julia?

I guess I should do some research on the truth of that matter, but it really bugged me when Irma Rombauer’s character in the movie said that she didn’t test all of her recipes.

ARGH!  Recipes must be tested!  How can someone just make something up out of thin air and not try it to see if it works before sharing it with the world?!

Well, I have some of these Joy of Cooking books (from the “All About…” series) and after ignoring them and glaring at them on the bookshelf for months now, I decided to give one of them a try.

That’s the real point of this challenge, isn’t it?  To take myself out of my comfort zone and try things I normally wouldn’t?

Ok then.  Our weekend-mornings chef (a.k.a. the husband) decided he wanted to make some spiced apple pancakes for breakfast.  So, I went to my bookshelf and grabbed this book: 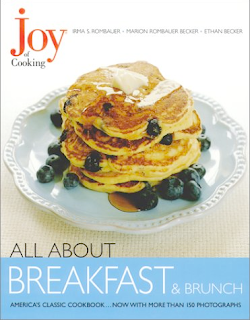 Joy of Cooking…  All About Breakfast & Brunch, by Imra Rombauer.

I found the pancakes section and we decided to use the Blueberry Buttermilk Pancakes recipe as our starting point.  Lots of changes made, but it was a good starting point and I might even use this cookbook again! 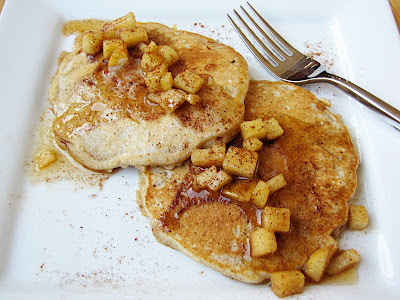 Spiced Apple Pancakes Recipe
adapted from All About Breakfast & Brunch

Directions:
Heat 2 tablespoons of the butter over medium heat in a skillet.  Dump in the apples, brown sugar & 1 teaspoon of the cinnamon, and sauté until soft.  Set aside.

In a small bowl, whisk together the buttermilk, 4 tablespoons melted butter & the egg yolks.

Dump the wet ingredients into the dry ingredients and whisk them gently together until just combined (lumps are ok!).

With a slotted spoon, scoop the sauteed apples out of their sauce and gently fold them into the batter.  Reserve the sauce for drizzling!

Cook the pancakes as you normally would.  Serve with the leftover apple caramel sauce, more caramel sauce if desired, maple syrup, cinnamon & sugar or whipped cream!