You may have seen these on here before.  A version of them at least.

I first posted this recipe a few years ago, but since then I have perfected my homemade brownies and I just decided these needed a bit of a makeover.  For the better, for sure! 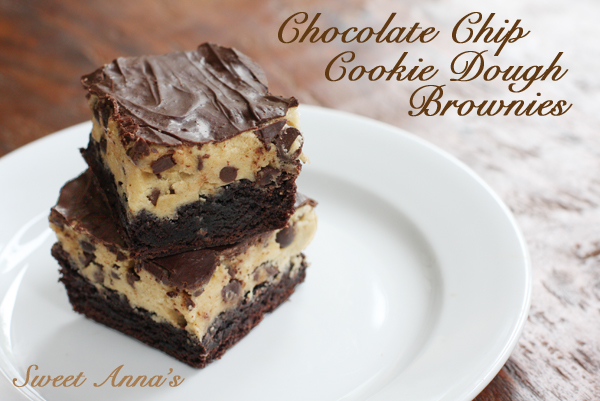 These brownies are very, very rich, so cut them small, but really…  is there anything wrong with that?

for the brownies:
for the cookie dough layer:
for the glaze:

Whisk in the sugar and then the eggs and vanilla until well combined and smooth. Whisk in the remaining butter and salt.

Switch to a fork or spoon and stir in the flour until combined. Pour the batter into the greased baking dish and place in the oven to bake for 35-40 minutes, until just set and the edges are starting to pull away from the pan. Let cool completely in the pan

While the brownies are cooling, make the cookie dough layer. In a large mixing bowl, beat together the melted butter and sugars until smooth and fluffy, about 3-4 minutes. Mix in the salt, vanilla & milk until combined.

Mix in the flour and chocolate chips until just combined. Spread the cookie dough evenly over the now-cool brownies in the pan. Place the pan into the fridge to chill while you make the glaze.

In a smallish, microwave-safe bowl, melt the chocolate chips with the oil, stirring well every 30 seconds until just smooth. Spread evenly over the cookie dough layer and return to the fridge to continue chilling.

Make these brownies at least a few hours (or up to a few days!) before you want to serve them, for best results. And cut them small... they are (obviously!) very rich!